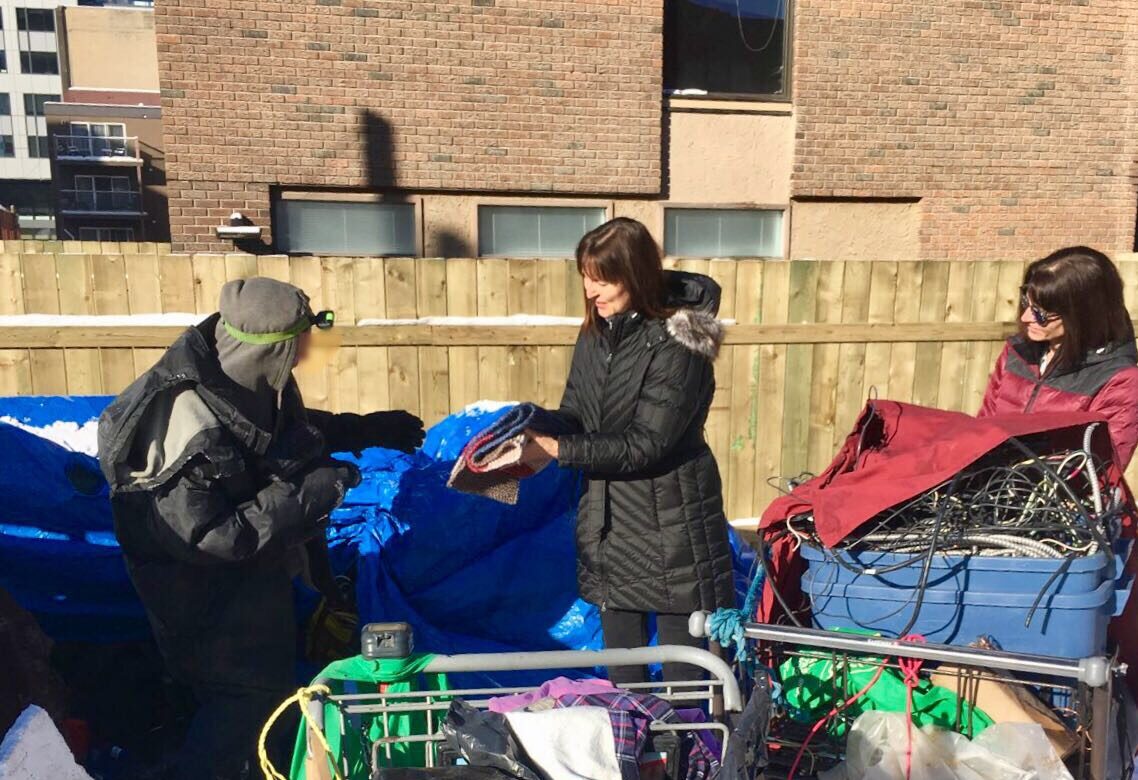 This past Valentines Day morning I got in to my car to head down to our church to meet a dedicated group of volunteers that were ready to serve on the streets of Calgary. Since Christmas, CommuKNITy Cares has been busy making hand-knit scarves and Valentines morning was the day we chose to use them to share God’s love with others. That morning we were setting out to meet some of our homeless population to give them a warm scarf and more importantly, to let them know they were loved! But that morning I found my thoughts wandered off as I was focussing on the dashboard of my car and the temperature reading from outside. It was -22 degrees Celcius and despite the fact that I was in a comfortable heated seat and held a heated steering wheel, I was concerned that I might not have brought a warm enough pair of mittens for our morning outside! Right at that moment it brought the whole day into perspective!

Our mission that cold morning was to once again share the love of God with others. Valentines Day is a day when we typically express our love for one another.  As we headed out that morning we were reminded of the greatest gift of love in Gods own son, Jesus.  He willingly died on the cross for us, to release us from the grips of our wrongdoings.  He has given us a new freedom and has filled us with a desire to share His love. He has given us a heart to serve!

For God so loved the world that he gave his one and only Son, that whoever believes in him shall not perish but have eternal life. John 3:16 NIV

CommuKNITy Cares is a ministry where we use our talents and our handicrafts to bridge the gap between us and others. We want to let them know that we care and they are important to us. The idea of handing out warm clothes to the those that are in need is not new, nor is the idea of hanging hand-knit scarves on fences for anyone that might need one. It is one worth repeating though! Given the ever growing needs in our city, the cooler temperatures and that fact that we love to knit and crochet, we saw this as a perfect opportunity for our ministry. Our hope is that this project will not only provide warmth for those who take the scarves but will also open all of our eyes to the needs of others. We want to encourage everyone to use whatever resources they may possess or skills they may have and do something to benefit others.

Let your light shine before others, so they may see your good works and give glory to your father in heaven. Matthew 5:16 CSB﻿

That morning we were guided around by one of Calgary’s finest police officers . We asked him to join us, not because we felt we needed protection, but more because of the work he has already done to establish relationships with so many of our homeless population. The rest of our team was made up people that brought varied skills and life experiences to the day, all of which proved to be valuable as we served and supported one another.

It was an eye opening morning for all of us as we discovered just how widespread the need was. Our first stop brought us to a man who wasn’t living within one of the shelters and had set up his own tent made out of a simple tarp. He has been living in that tent throughout these frigid temperatures we have been experiencing over the past few weeks. He welcomed us into his space and told us about his home and how he tries to protect himself from the elements. He shared with us how he creates some income for himself by stripping wires to collect copper so that he can turn it in for cash. The freezing temperatures has made that difficult for him to do this as his fingers get stiff from the cold and can’t be exposed for too long. Our conversation revealed that although his circumstances were not what he had hoped for, he was making the best of it and found things to be grateful for. He was happy that the neighbours allowed his home to remain in place. He also shared a story that revealed his hope and belief in community. He smiled as we gave him the scarf and shared with us that our gesture had come full circle for him. In his past he too knit scarves and handed them out to the less fortunate. Wow!

Our trusted guide took us to other locations where we encountered so many more individuals. We visited a bottle depot, the Salvation Army’s Centre of Hope, the Calgary Drop In Center, the Mustard Seed and Alpha House. At each stop we engaged with people in conversation and learned a little about their circumstances. We personally handed out close to half of the 140 scarves we had made and then hung the remainder on fences around the city for anyone to take if needed.

I have to say though, that the true beauty of the morning wasn’t in the colourful display of scarves or the pretty tags hanging from each one, it was in the interactions we had with everyone! Our homeless population is made up of people just like you and me. While some are struggling with addictions, some have just hit hard times either through things like a job loss, a relationship break up or an illness. Our conversations helped to break down barriers, either ones we had set up due to our own prejudices or ones they build for their own protection. The simple act of loving another is so impactful!

We are not looking for personal recognition for the work we do. While we are very aware that God is using us for His glory, CommuKNITy Cares has caught the attention of a few. I am beyond grateful for Kyle Brittain for taking the time to tweet after walking by our scarves at Alpha House. It’s apparent he cares deeply for his community and the people in it and by posting his video, he has brought more awareness to our mission. Thank you so much Kyle! Your post and the media coverage that followed will hopefully inspire others get involved with CommuKNITy Cares or to do something on their own.

My children, our love should not be just words and talk; it must be true love, which shows itself in action.
1 John 3:18 Good News Translation (GNT)